The dates for all works (poetry and essays) are the date published on elasticstyle.com except for works by ~Beto where the date given is the first date of publication, no matter where.

Some fifty years ago, when I lived in Munich, a friend suggested that I might enjoy a visit to the Lenbachhaus gallery. At that time, the gallery concentrated on the works of der Blaue Reiter, composed of contemporary German and Russian artists, among whom were Franz Marc and Wassily Kandinsky. I was fascinated by their work and spent many hours at the gallery learning the progression in their styles. I was particularly interested in Kandinsky’s work, an interest I have had ever since.

Recently I obtained a copy of Kandinsky: Complete Writings on Art (a tome of 900 pages), which includes his two books on art, Über das Geistige in der Kunst (1911) [On the Spiritual in Art], Punkt und Linie zu Fläche (1923) [Point and Line to Plane] and an illustrated book of his poetry, Klänge (1912) [Sounds]. More on that in the future.

Also, there is a copy of the Cologne Lecture Kandinsky über seine Entwicklung (1914) [Kandinsky on his Development]. In the lecture, he gives an autobiographical description of his development as an artist. Although he wrote (he never gave the talk) primarily concerning the growth of a painter, his insights apply equally to the other arts, specifically to poets.

In the Cologne lecture, Kandinsky describes his periods of development as follows:

Kandinsky then explains how, in the first period, two different impulses constrained him: love of nature and the urge to create. The result of these two conflicting impulses was the desire to paint a picture, more or less to paint a colorful photograph. However, he loved color and began to work in the realm of color composition. That became the means of transitioning to the second period.

In the second period, he chose a specific period, medieval Germany, to emulate, though in freer form, not worrying about the exact rendition of the subject but more concerned with color. In Colorful Life, he begins a path toward abstraction. 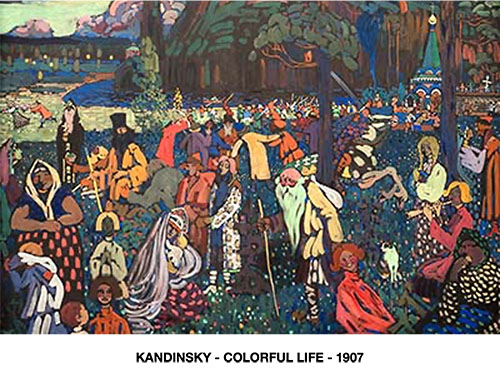 Slowly he freed himself from the confines of representational art and moved into the realm of the abstract. This transition is visible in Sketch for Composition 2 (the final version is lost). 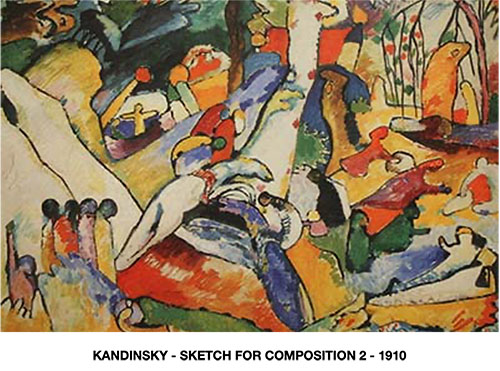 Kandinsky’s painting Composition 7 (1913) is more abstract, though still primarily a composition in color.

Some ten years later, when, in his painting Composition 8 (1923), during his stint at the Bauhaus (1922-1932), he realizes a balance of color and form and finds himself in his third period. 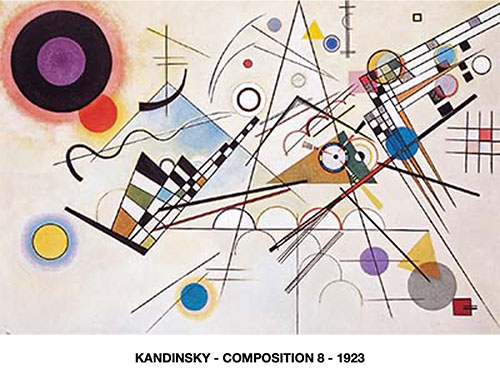 I present the above as illustrative of Kandinsky’s development from (more or less) representational art to the abstract. I should note that this development progressed with numerous trial and error paintings until he was satisfied with the result.

Development of a Poet

The writer interested in poetry as an art form may well follow Kandinsky’s example of development. However, in my opinion, the three periods might better be understood as amateur, apprentice, and master. I do not mean amateur in a negative sense, but as one who does not seek to improve through study regardless of talent. The amateur differs from the apprentice who seeks through study and practice to improve skill, that is, to learn the doing of poetry, learn new forms, and practice the old, classical aspects of poetry. To state it differently, the apprentice seeks the freedom afforded by developing his original form, a style that bears a personal imprint. The master, on the other hand, supported by that attained freedom, seeks to practice the skills learned as an apprentice and to further those skills through practice and increase the freedom, improve the original form, and deepen the personal imprint previously achieved.

I recall reading (where I don’t remember, but it may have been Ezra Pound) that writing poetry is hard work. It is better to produce one good work than voluminous works.

Thank you for reading
~Beto

Born and raised in NYC, I lived in Austin, Texas for many years (where I received a BA & MLIS from UT-Austin) and currently reside in Raleigh, NC. I’m a librarian and have been writing poetry (on and off) since my early 20s. Several of my poems were published in various anthologies in 2022. I’ve also written short stories and novels–and have published book, film, and music reviews in the 1980-1990s.  Most of my recent poems strive to integrate various modern (i.e., post-WWI) techniques and approaches (e.g., Dadaism, surrealism, found poetry, text manipulation, concrete/visual poetry, LANGUAGE poetry, confessional poetry).

i’m an intellectual property abolitionist and advocate for free software and art; everything i make is under copyleft licenses.

i believe that every person is the same person born into different bodies and circumstances, and that if we could understand this things might be a lot nicer.